Local governments have an opportunity to achieve substantial cost savings, demonstrate energy and environmental leadership, develop local municipal capacity and expertise, and raise public awareness by promoting green government operations. “Green” government operations are operations that minimize an entity’s environmental impact, including its energy use, water use, waste and pollution generation, and greenhouse gas emissions. While municipalities and counties across the country face tight budgets, smart investments can reduce operational costs and demonstrate how to implement climate-friendly, green activities. 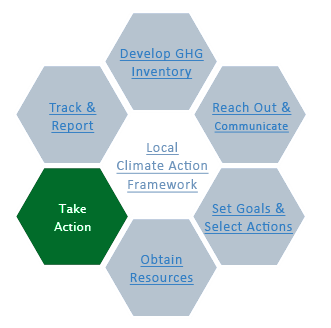 These guidelines below provide local governments with information on how to make their operations greener and then use those examples to inspire and promote community action. Promoting green government operations might include:

The following key steps describe how to effectively design and implement green upgrades, with a focus on government facilities. Steps include convening decision-makers, understanding existing efforts, and publicizing stories that demonstrate success. Information on adopting a policy in the form of a plan, ordinance, regulation, or other mechanism to mandate sustainable actions is covered under Adopt a Policy. Programs related to incentivizing or otherwise encouraging behavior changes in the community are covered under Engage the Community.

To be connected with a local representative with experience implementing these types of programs, contact us.

Here we discuss the key steps in designing and implementing green government upgrades. The steps in this process are not necessarily intended to be pursued in linear order, as illustrated in the diagram. For example, establishing goals and identifying obstacles, surveying local efforts and researching similar programs, developing program/project details, and developing an outreach plan may all happen simultaneously. Alternatively, earlier steps may be revisited after subsequent steps are explored. In addition, engaging stakeholders occurs throughout all steps of the process and is integrated into each of the step descriptions.

Phoenix, Arizona: Energy Conservation Program
An energy conservation program that has evolved into a broader sustainability program that involves land use, recycling, transportation, and water conservation in addition to energy efficiency (highlighted on page 47 of document).

Delaware Valley Regional Planning CommissionExit
Program website that includes a suite of tools that local governments can use to promote green operations, including a baseline analysis tool, a regional GHG inventory tool, and an electric vehicle ownership tool.

New York State Climate Smart CommunitiesExit
A collection of resources that provides an overview of climate change, a thorough guide for local climate change responses, and other resources, including land use and wind energy toolkits.

DOE SunShot Initiative: Solar on Municipal Facilities WebinarExit
An hour-long webinar that shares the experience and lessons learned of three cities that have successfully installed solar on city-owned facilities.

Acknowledgements:
EPA would like to acknowledge Liz Compitello (Delaware Valley Regional Planning Commission) and Peter Ludwig (Elevate Energy, Illinois) for their valuable input and feedback as stakeholder reviewers for this page, as well as Chris Carrick, Sam Gordon, and Brian Pincelli (Central New York Regional Planning and Development Board) for their contributions to the Preble, New York, case study.