Getting Started – Identify Your AVERT Region(s) 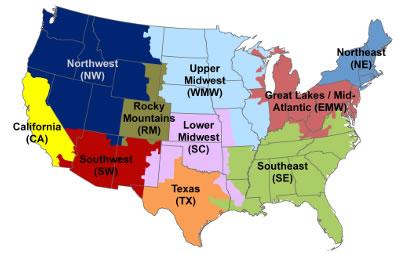 If you are using AVERT for a state that is split across AVERT boundaries, you might need to run AVERT more than once. For example, if you want to capture the impacts of a statewide EE/RE program in a state that is in multiple AVERT regions, apportion the EE/RE impact based on the proportion of generation in each region (found in the table above), run AVERT for each region, and aggregate the results. EPA recommends doing this for each region that contains more than 5 percent of the state’s generation. To see a demonstration of how this is done, skip ahead to Step 5: Run AVERT for Multiple Regions if Needed.

It is not always necessary to run AVERT more than once, even if your state falls into more than one AVERT region. In the following situations, states that are split across AVERT boundaries only need to run AVERT once:

The chart below gives each state’s apportionment by AVERT region.

State apportionment by AVERT region, based on generation from 2010 to 2013: