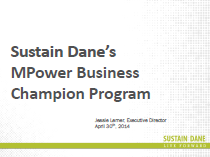 A partnership between Sustain Dane, the City of Madison, and the local utility (MGE) launched a greenhouse gas reduction program called MPower Champions. The program began in 2007 and aimed to raise community awareness and mobilize the commercial sector to join the City in promoting sustainability initiatives and reducing greenhouse gas (GHG) emissions. MPower Champions was developed to help businesses negotiate the multitude of free resources available to them, to take precise measurements of their baseline emissions, increase their energy efficiency, use renewable energy, mobilize their employees to make changes at work and at home, and track their overall progress. With the Climate Showcase Communities grant, Madison:

The program worked with 68 businesses over 4 years, including collaboration on the creation of a Sustainable Business Network. The goal of the Network was to provide a forum for businesses and schools who completed the MPower program to share best practices and unexpected benefits. This network was created to inspire and engage the broader community, help recruit new Champions, and feed into an ongoing GHG reduction effort in the Madison area.

The MPower Business Champions program provided support to businesses so that they could use sustainability and energy efficiency resources and gather data to measure their impact. Program participants selected and documented implementation of five sustainability projects, and received feedback from the MPower team. Energy Advocates worked one-on-one with Champion businesses. Additional staff were hired to accommodate the new Champions, and Madison sought efficiencies to allow each Energy Advocate to work with more businesses. To further improve efficiency and encourage program replication, Madison developed standardized toolkits for tracking data.

Another component of the project was working with schools. Sustain Dane partnered with Madison Metropolitan School District over the course of three years to enhance their sustainability programs and reduce emissions. During Year 1, an energy reduction campaign was initiated in partnership with McKinstry. During Year 2, the “lights off” campaign was launched to further encourage energy efficiency behaviors for both students and staff. The Sustainable Schools Program Manager provided support during this project, and piloted the MPower Schools Program (also referred to as the “Race to Clean Energy”) in four schools during the 2012-2013 academic year. The goal of this program was to engage 50% of Madison elementary, middle, and high school students in hands-on lessons about sustainability and energy efficiency over three years. The “People. Power. Planet.” (PPP) Campaign (referred to as the “School Climate Challenge” in the grant) launched in Year 2 and continued through Year 3, allowing schools in the district to track their energy savings and emission reductions.  A partnership with the GROW Gardens Pilot sparked the “Growing Outdoor Classroom Program,” which worked with one middle school and four elementary schools in Year 3 of the project. PPP campaign ended at the end of the 2013-2014 academic year.

As of the final report, MPower will received additional funding from the City of Madison to continue the project.