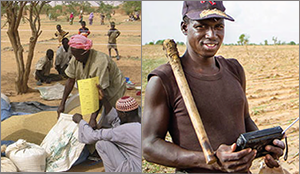 Human basic needs, such as food, water, health, and shelter, are affected by climate. Changes in climate may threaten these needs with increased temperatures, sea level rise, changes in precipitation, and more frequent or intense extreme events.

Climate change will affect individuals and groups differently. Certain groups of people are particularly sensitive to climate change impacts, such as the elderly, the infirm, children and pregnant women, native and tribal groups, and low-income populations.

other parts of the world could raise economic, health, and national security issues for the United States. [1], [2], [3]

Although climate change is an inherently global issue, the impacts will not be felt equally across the planet. Impacts are likely to differ in both magnitude and rate of change in different continents, countries, and regions. Some nations will likely experience more adverse effects than others. Other nations may benefit from climate changes. The capacity to adapt to climate change can influence how climate change affects individuals, communities, countries, and the global population.

Impacts on Agriculture and Food

Changes in climate could have significant impacts on food production around the world. Heat stress, droughts, and flooding events may lead to reductions in crop yields and livestock productivity. Areas that are already affected by drought, such as Australia and the Sahel in Africa, will likely experience reductions in water available for irrigation. [2]

Climate change is affecting many fisheries around the world. Increasing ocean temperatures have shifted some marine species to cooler waters outside of their normal range. Fisheries are important for the food supply and economy of many countries. For example, more than 40 million people rely on the fish caught in the Lower Mekong delta in Asia, which is the largest freshwater fishery in the world. Projected reductions in water flows and increases in sea level may negatively affect water quality and fish species in regions like these, affecting the food supply for communities that depend on these resources. [5], [6]

For more information about the impacts of climate change on agriculture and food production, please visit the Agriculture and Food Supply Impacts & Adaptation page.

Impacts on Water Supply and Quality 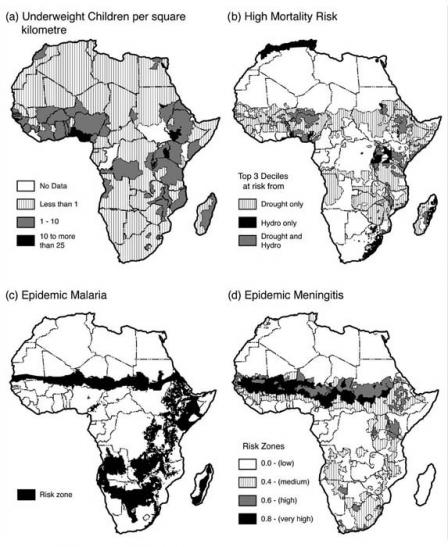 
Click on the image to see a larger version.

Semi-arid and arid areas (such as the Mediterranean, southern Africa, and northeastern Brazil) are particularly vulnerable to the impacts of climate change on water supply. Over the next century, these areas will likely experience decreases in water resources, especially in areas that are already water-stressed due to droughts, population pressures, and water resource extraction. [2], [6], [8]

As climate changes, water is very likely to become scarce at least part of the time in many areas, but more plentiful part of the time in some areas as well. The availability of water is strongly related to the amount and timing of runoff and precipitation. With a 2.7°F rise in global mean temperature, annual average streamflow is projected to increase by 10-50% at high latitudes and in some wet tropical areas, but decrease by 10-50% in some dry regions at mid-latitudes and in the subtropics. As temperatures rise, snowpack is declining in many regions and glaciers are melting at unprecedented rates, making water less available in areas that depend on it from melting snow and glaciers during spring and summer. Droughts are likely to become more widespread. When it does rain, more precipitation is expected to fall in extreme heavy precipitation events. Increases in heavy precipitation events would not increase water supply, but instead result in increased flooding, except in river basins with large dams able to hold excess water until it is needed. [8] 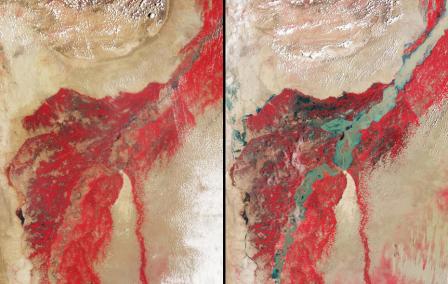 Indus River in Southern Pakistan (Left: August 2009; Right: August 2010). In August 2010, record monsoon rains flooded significant portions of Pakistan. Twenty percent of the country was underwater as a result of the floods, affecting about 20 million Pakistanis and rendering six million homeless. In the image from 2009, the Indus is about 0.6 miles wide. In the 2010 image, the river is 14 miles wide or more in parts. Source: NASA (2010)

Click on the image to see a larger version.Water quality is important for ecosystems, human health and sanitation, agriculture, and other purposes. Increases in temperature, changes in precipitation, sea level rise, and extreme events could diminish water quality in many regions. Large rainstorms may cause large amounts of pollutants to enter rivers and estuaries, as excess water may overwhelm wastewater systems and natural buffers.  Increased pollution as well as increasing water temperatures can cause algal blooms and potentially increase bacteria in water bodies. In coastal areas and small islands, saltwater from rising sea level and storm surges threaten water supplies. These impacts may require communities to begin treating their water in order to provide safe water resources for human uses. [1], [8]

For more information about the impacts of climate change on the water supply, please visit the Water Impacts & Adaptation page.

The risks of climate-sensitive diseases and health impacts can be high in countries that have little capacity to prevent and treat illness. There are many examples of health impacts related to climate change. [1]

Certain groups of people in low-income countries are especially at risk for adverse health effects from climate change. These at-risk groups include urban people living in poverty, older adults, young children, traditional societies, subsistence farmers, and coastal populations. Many regions, such as Europe, South Asia, Australia, and North America, have experienced heat-related health impacts. Rural populations, older adults, outdoor workers, and those without access to air conditioning are often the most vulnerable to heat-related illness and death. [9] For more information about the climate impacts on vulnerable populations, please visit the Society Impacts & Adaptation page.

Climate change affects the migration of people within and between countries around the world. A variety of reasons may force people to migrate into other areas. These reasons include conflicts, such as ethnic or resource conflicts, degraded ecosystem services, such as lack of viable agricultural land or fresh water, and extreme events, such as flooding, drought, and hurricanes. Extreme events displace many people, especially in areas that do not have the ability or resources to quickly respond or rebuild after disasters. Many types of extreme events are becoming more frequent or severe because of climate change, which exacerbates existing conflicts. This will likely increase the numbers of people migrating during and after these types of events. [10]

Coastal settlements and low-lying areas are particularly vulnerable to climate change impacts, such as sea level rise, erosion, and extreme storms. Rising ocean temperatures and acidity may also threaten coastal ecosystems. [11] As coastal habitats (such as barrier islands, wetlands, deltas, and estuaries) are destroyed, coastal settlements can become more vulnerable to flooding from storm surges and erosion. Both developing and developed countries are vulnerable to the impacts of sea level rise. For example, Bangladesh, the Netherlands, and Guyana are particularly at-risk.

For more information about the impacts of climate change on coastal areas, please visit the Coastal Impacts & Adaptation page.

For low-elevation coastal areas, this graphic projects current and future population exposure to inundation due to a 1-in-100 year extreme event with sea level rise of 0.15 m (.5 ft, low emissions scenario) to 0.50 m (1.6 ft, high emissions scenario, due to partial melting of Greenland and West Antartic Ice Sheets. IPCC (2014) [12]

Click on the map to see a larger version.

For the first time in human history, more people are living in cities than in rural areas. The term "megacities" refers to cities with populations over 10 million. Fifteen of the world's 20 megacities are threatened by sea level rise and increased coastal storm surges. A 2010 study by the Asian Development Bank, the World Bank, and the Japan International Cooperation Agency looked at the effects of climate change on three of Asia's megacities. The study estimated that 26% of the population in Ho Chi Minh City is currently affected by extreme storm events. By 2050, this number could climb to more than 60%. In Manila, a major flood under a worst-case scenario could result in the loss of nearly a quarter of the gross domestic product (GDP) of the metropolitan area. Manila faces not only sea level rise and extreme rainfall events but also typhoons. The study concluded that such climate-related risks must be an integral part of city and regional planning for vulnerable megacities. 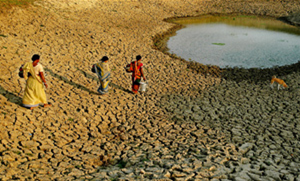 Approximately 1.4 billion people, close to one fifth of the world’s population, live below the World Bank's measure of extreme poverty, earning less than US $1.25 a day [13] Many lower-income groups depend on publicly provided resources and services such as water, energy, and transportation. Extreme events can affect and disrupt these resources and services, sometimes beyond replacement or repair. Many people in lower-income countries cannot afford or gain access to adaptation mechanisms such as air conditioning, heating, or disaster insurance. This lack of adaptive capacity makes the world’s poor especially vulnerable to the impacts of climate extremes, exacerbating existing conditions of poverty and inequality, and ultimately leading to more poverty. [13]

Climate change impacts can differ according to gender. Worldwide, women have a higher rate of mortality than men from severe storms or other extreme events, although there is regional variation. In some regions, working-age men who work outdoors are more vulnerable to heat-related deaths. Women developing countries women may be particularly vulnerable to extreme events due to differences in poverty and physical vulnerability due to undernutrition or pregnancy. As climate change causes extreme events to become more frequent or severe, women may be disproportionately affected. [9] 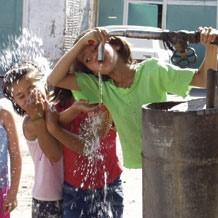 Water scarcity led to tensions in southern Kazakhstan. USAID responded by increasing access to drinking water and irrigation. Source: USAIDClimate change impacts are expected to exacerbate national security issues and increase the number of international conflicts. [1] The Department of Defense reports that climate change is likely cause instability in other countries-- impairing access to food and water, damaging infrastructure, spreading disease, uprooting and displacing large numbers of people—which also affects the United States. They report: “Climate change will affect the Department of Defense's ability to defend the Nation and poses immediate risks to U.S. National security.” [14]

Many concerns revolve around the use of natural resources, such as water. In many parts of the world, water issues cross local and national borders. Access to consistent and reliable sources of water in these regions is greatly valued. Changes in the timing and intensity of rainfall would threaten already limited water sources and potentially cause future conflicts. [2] Evidence suggests most conflict is likely to occur between local communities, socioeconomic groups, and states, while bilateral and multilateral interactions have shown evidence of formal cooperation over resources. [8]

Threatened food security in parts of Asia and sub-Saharan Africa could also lead to conflict. Rapid population growth and changes in precipitation and temperature, among other factors, are already affecting crop yields. Resulting food shortages could increase the risk of humanitarian crises and trigger population migration across national borders, ultimately sparking political instability. [2], [4], [10], [15]

The ongoing loss of the ice cover in the Arctic Ocean is very likely to have with national security implications. The Arctic Ocean has a long history of modest, though growing, shipping activity, including trans-Arctic shipping routes. Declining sea ice coverage will allow more access to these waters. However, a number of other international issues will influence the potential growth in shipping. In the case of the Arctic Ocean, increasing access to these waters means that issues of sovereignty (priority in control over an area), security (responsibility for policing the passageways), environmental protection (control of ship-based air and water pollution, noise, or ship strikes of whales), and safety (responsibility for rescue and response) will become more important. [16]

Highlights of recent and projected regional impacts are shown below.

Impacts on Australia and New Zealand [17]

Impacts on Central and South America [19]