Understanding the Link Between Climate Change and Extreme Weather

What is extreme weather?

Extreme weather and climate events are events that:

Scientists study many aspects of change in extreme weather and climate events. These include:

Establishing the most likely causes behind an extreme weather event can be challenging, since these events are due to combinations of multiple factors, including natural variability. Nevertheless, scientists have been able to draw a connection between some types of extreme climate patterns—an even some individual events—and climate change. A good way to think about this connection is to focus on whether an extreme weather event was made more likely by climate change.

Learn more by clicking on each tab below:

Adaptation: Reducing the Threat of Climate Change and Preparing for Impacts

Extreme weather and climate events pose a serious threat to the health and welfare of American families and businesses. For instance, between 2011 and 2013, the United States experienced 32 weather events that each caused at least one billion dollars in damages.[7] 2012 ranks as 2nd costliest year on record, with more than $110 billion in damages. 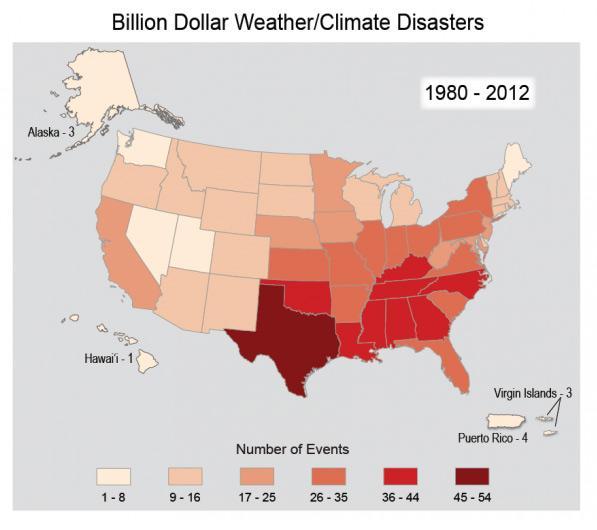 This map summarizes the number of times each state has been affected by weather and climate events over the past 30 years that have resulted in more than a billion dollars in damages. The Southeast has been affected by more billion-dollar disasters than any other region. The primary disaster type for coastal states such as Florida is hurricanes, while interior and northern states in the region also experience sizeable numbers of tornadoes and winter storms. For a list of events and the affected states,
see: http://www.ncdc.noaa.gov/billions/events
Source: USGCRP (2014) Billion Dollar Weather/Climate Disasters.

EPA is taking a number of common-sense actions to reduce greenhouse gas emissions and help cities and towns build more resilient communities to prepare for the impacts of a changing climate, including the weather extremes described above.

For more information about climate adaptation and things you can do to prepare for changes in extreme weather events, see Climate Change Adaptation.

For more information on how you can reduce greenhouse gas emissions at home, on the road, and in your workplace, see What You Can Do.

[3] CCSP (2008). Weather and climate extremes in a changing climate. Synthesis and Assessment Product 3.3.